Ah  – it’s nearly eleven and we’ve just got in. Ida is fast asleep in the pushchair and I am hastily writing this because I’m pretty sure she’ll wake up as I PJ her and the resulting cuddling etc will take longer than I have left of today.

I’m determined to post before midnight for previously unmentioned reasons. Probably can drop the cloak and dagger stuff eh?

Had a brilliant family party for my aunt (hmm she’s only three years older than me…) A surprise one but she scrubbed up well. I think she may have guessed – we’re not the most discreet bunch. It was lovely to see everyone and the kids had a classic family party time. Lots of sugar, dance floor to themselves, various doting aunts and grandmas, cousins to race about with and in Z’s case hang about on the stairs with. Daring each other and sneaking cakes and cola. He had

the chance to lay down some moves, premiere his new cart-wheel “move” and impress some three-year olds. Classic.

I contributed a few metres of bunting (heart-shaped) :

Various foods, including these  butterfly cakes that turned out yummy:

and my children were VERY entertaining:

Really good morning today – Steve wasn’t working so we got to lie in bed, all of us, idly chatting, reading books, playing caves with Ida and her menagerie of stuffed toys and listening to the Archers. That was the only low spot as this was the week Nigel plunged to his death, farewell gorilla suited joker…

When I was pregnant with Ida we invested in  a new enormous bed, a super king. I’ve never had a new bed before – the one we had wasn’t even a full double and being as I’m a fine figure of a woman and Steve resembles a grizzly bear it’s always been cramped. Add a wriggly toddler and you can imagine. Even at seven yrs Zeph usually still got in for a quick cuddle in the mornings and I didn’t want him to feel displaced by the new baby and me telling him to be careful all the time. Best thing we ever bought, lots of room for everyone to be cosy and no more elbow digging – perfect result. Though I have to say modern furniture is definitely not up to the standard of our usual second-hand, older, better made stuff.  And I nearly died when I saw how expensive the sheets were. I resorted to making some in the end for a considerable saving.

This mornings’ bedfest was rendered extra good  by the postman delivering a late Xmas parcel from a crafty aunt and cousin with some red fingerless gloves for Z which he wore most of the day and an icing set for me – whoop! Loads of different nozzles and bottles rather than bags which I have a poor record with. Perfect and just in time for Ida’s owl birthday cake. I am ridiculously happy in very little woman style.

Had great domestic day pottering around, doing a load of cooking,

sorting out and washing down a particularly mouldy area of kitchen. (Our house is old, ramshackle and in desperate need of a new damp proof course) We also blew up balloons with Ida to decorate for her party and put up the birthday bunting. 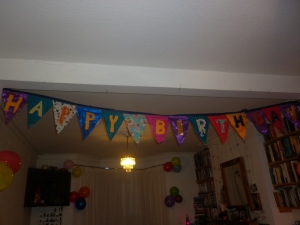 I usually make a banner for birthdays but decided for Zeph’s this year, in October, to make some bunting that just said Happy Birthday so it could be reused. It’s double-sided so it can hang in the middle of the room and gloriously random bits of scrap material. I LOVE bunting and am definitely considering making more – and maybe some for selling. It’s a great way to use up bits and bobs, bunting just looks so festive and my haphazard sewing suits it.

Ready to sew - my helper likes to pass me cottons and root round in the button tin. I like her to be where I can keep an eye on her! 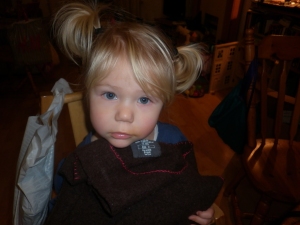 Ida with her dress..hurry up mum!

Must get on with Ida’s dress. I’ve nearly finished blanket stitching the edges and going to start sewing on the Scandinavian style flowers on next.